PGA show 2015 is officially over. Thankfully we have some pictures and notes to remember what happened and what you should know if you weren’t able to attend.

We kicked things off with the Open Forum.

One of the best opportunities to learn and talk about what’s going on in golf science and honestly all of instruction. It’s a gathering of some awesome people put together by some great people (Nick Chertock, Chris Como, and Michael Michaelides check out the episode we recorded before the Open Forum here). 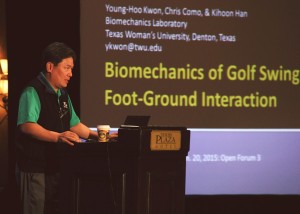 It was a great night highlighted with live lessons by Brian Manzella and Rob Houlding.

And some awesome panels with so many extremely knowledgable people. Talking about everything from “Skill Acquisition: Changing movement patterns” to “Training Golfers to harness Ground Reaction Forces”

Make sure to watch for the recording of this event.
(I’ll be sending an email out so this might be a great time to get on the email list) 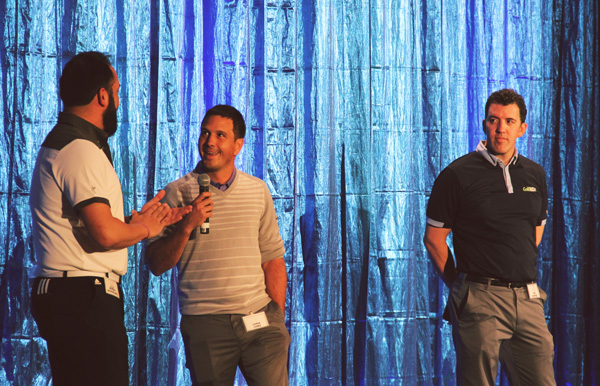 One recurring conversation I had was talking about some of the new motion capture devices.

Everyone should be familiar with K-Vest and what they’ve been doing so well since 2002. But some new players have entered with some new features.

So what about K-Vest? For one experience (they’ve been doing this for 10+ years) and Bio Feedback. If you just want to analyze and look at the data, it appears that any of these systems will work. It will just be up to you deciding what you need. (and your students)

The part that is always interesting is the practical application… Do you have the knowledge to take raw data and develop a plan for improvement or can the tech help you and your student to understand that easier.

In those regards K-Vest has a huge advantage with the Bio Feedback and training students are able to do. And although the competitors could get there, it’s going to take awhile (if you’re asking me I’m saying multiple years)

K-Vest has a proven system, education, and support. Sounds like a good combo if you ask me.

My Swing Professional has a wireless full body motion capture tool that consists of 17 body sensors. From what I saw and heard it has some really cool features. Some of those include – portable, indoor / outdoor, wireless, and shareable data… One of the coolest features you’ll probably like is the price. They’re going with something totally different at $199 per month.

One of the cons I heard more than a couple times is that you have to use all 17 sensors or the system doesn’t work. Something to think about if you have to allow 10 -15 minutes for a student to suit up and calibrate the system. You can check out there website here.

@myswingpro was a very cool 3D motion capture system and I’ll be happy to be the first in Canada once released! #signmeup

Another new player is 4d motion. Although we only saw a prototype at the show it looks to be promising. The sensors are light weight and can be positioned anywhere you want (and you can use how many you want) via bluetooth goes directly to your phone or tablet. Although not positive on price it looks like it will be just over $1000 for 5 or 7 sensors. Which might be the perfect solution for someone looking to have a 3d motion capture device but not feeling like you have to use it for every lesson.

Another really cool concept is taking motion capture out to the course. Imagine being able to compare a swing on the range vs one on the course. Sounds pretty cool to me.

One of my choices for best product. 4dmotion Lots of positive potential. Look for it in coming months!… http://t.co/Hswq6GYIZa

A system you’ve probably seen some of is GEARS. GEARS is a camera-based system, powered by 8 cameras running at 360 frames per second picking up data from the markers worn on the body and club. In the picture below you can get a rough idea of what the system looks like. It’s totally different from any of the other systems mentioned above.

If you have the room and budget it seems to be one of the best options. However it’s definitely not for everyone.

Chatting and putting some work in with Michael Neff, the founder of Gears Golf. pic.twitter.com/4fGjL4eeaU

I would love to hear your thoughts about what system you’re thinking about picking up. Or experience you’ve had with one. Just leave a comment below.