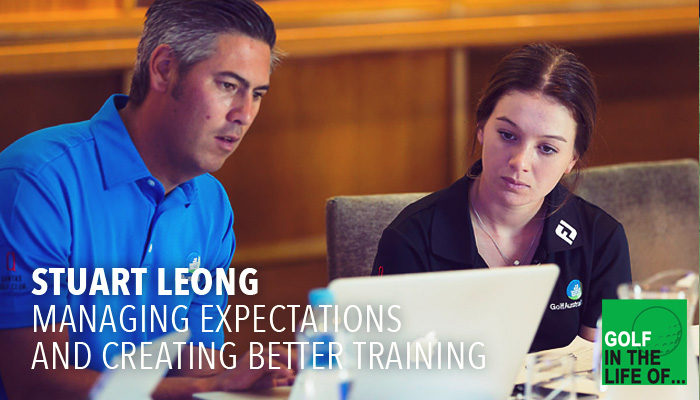 This conversation ranges from working on best practices for working on a side project to creating better learning environments for students based on data. Definitely a conversation to grow from with 2015 Australian Teacher of the Year, Stuart Leong.

Stuart shares the origin story of Shots to Hole and how it went from a project for one student, to a pilot for 5 golfers, and now supporting national teams, tour players, and gathering data from over a million shots every two months.

Far too often people don’t act on ideas or at the very least write them down. No matter the industry or avenue trying new things and learning helps you be a better coach. Whatever you can do to feel like a beginner again and feel that challenge so you can better relate to students.

Steps to take with ideas and side projects:

As a coach you have to decide what project to take on. Stuart shares how data and analysis has helped him be a better coach and work differently with players. We also tackle the all important process of how looking at data and making smarter decisions looks like in the real world. Do you require data from students? Do you require playing with them? Stuart shares his hacks to get the most critical data in the shortest amount of time.

How good is good? Our perception of what good is has been based on what we see on TV. And that reality has hurt most golfers AND coaches. Stuart shares some examples from the shots to hole data and helps change our perspective on what’s good and what’s not. This is awesome (and I look like a fool with how wrong my guesses were)!

We talk about taking data and crafting highly effective games and training from adults to juniors, a critical skills for every coach.

Certified Australian PGA Member Stuart Leong has built a reputation as one of the leading golf teachers in Australia, with his evidence-based coaching methods consistently achieving faster results for golfers of all levels and abilities.

He has also held significant positions as Manager of the state-of-the-art PGA Centre for Learning and Performance (PGACLP) and Manager of Coaching Programs for the PGA of Australia, a role in which he developed and oversaw numerous coaching programs. Currently Stuart is the Director of Techology for Golf Australia’s High Performance Program.

A former Tournament Professional, Stuart’s coaching philosophy is to practise the areas that will most influence score and develop the skills required to shoot lower scores on a regular basis.

With vast experience and expertise in the use of TrackMan, SAM PuttLab, SAM BalanceLab and his own internationally recognised high-performance tool, ShotsToHole, Stuart is currently at the forefront of modern golf technology and data.

As Australia’s Senior AimPoint Instructor, Stuart also works closely with many Tour Players, National Squads, State Squads and Elite Programs throughout Australia and New Zealand, helping golfers improve one of the most essential skills of the game – green reading.

Stuart offers a unique golf coaching perspective that focuses directly on better performance. He is passionate about guiding beginner, amateur and elite golfers toward the achievement of their various goals in the game.