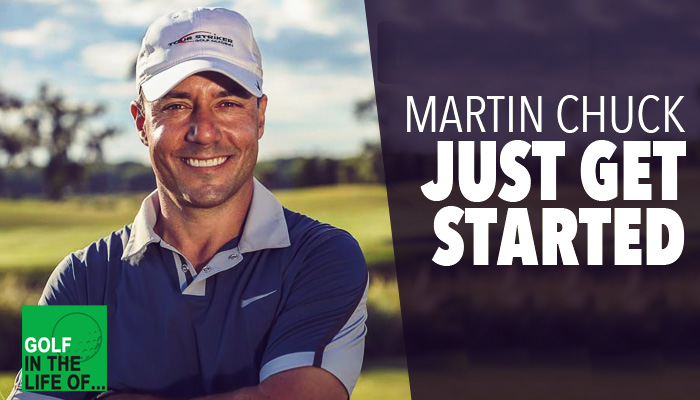 Candid advice from Martin Chuck on everything from how to teach at a golf school to why it’s important to build an audience even if you’re focused on just teaching the students at your club.

Martin shared some of his perspective from his golf schools.  How he approaches it and how he wants students to come into a learning environment.

“You have to be a fairly decent coach and have a platform to get in front of golfers.”

We talk about the reality of growing beyond a private club and your local audience.  We learn how golf instructors should be using social media and the potential with partnerships like Martin has with Revolution Golf.

Links To Check Out

After a long and storied path as a golf professional, Martin started the Tour Striker Golf Academy in the Spring of 2011 and it has become one of the most successful Golf Academy and Coaching Programs in North America.

Quickly becoming one of the World’s most prominent coaches, Martin Chuck developed his love and talent for the game of golf north of the border in Toronto, Ontario, Canada. Like most kids from Canada, ice hockey was Martin’s first sporting love. It wasn’t long before the allure of golf took hold. Like any true outlier in his given profession, Martin found himself in the shadow of two of the World’s best ball strikers and Canadian Legends, Moe Norman and George Knudson. “The time spent around George and Moe was invaluable and back then, I didn’t realize how truly special of an opportunity it was.” says Chuck. “I was able to watch, witness and in the case of Mr. Knudson, work for one of the best ball strikers of all-time. I started as a teaching assistant for Mr. Knudson 30 years ago. I guess I owe him for my overnight success as an instructor!”

Martin has consulted and taught PGA Tour Winners, Ryder Cup, President’s Cup and Major Champions. Martin is not a traveling Tour Coach. His preference is to stay home with his family and help Amateur golfers improve their games. During summer months, escaping the heat of Phoenix, he takes his family and Tour Striker Golf Academy on the road to various facilities in the US, Canada and abroad.

Along the way, he owes a debt of gratitude to all the coaches who have helped him gain a greater knowledge of the game, including; Mike Hebron, Ben Doyle, Brian Manzella, Mark Evershed, Mike LaBauve, Herb Wimberly, Ben Kern, Mike Bennett, Andy Plummer, Joe Mayo, Aaron Olson, Jeff Ritter and Peter Croker, to name but a few.